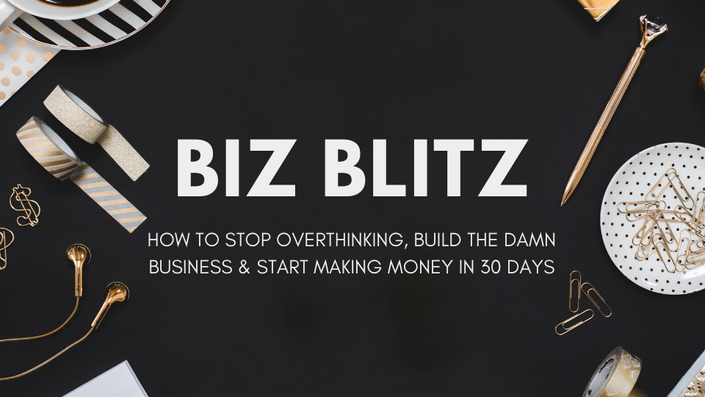 How to Stop Overthinking, Build The Damn Business & Start Making Money in 30 Days

YOU HAVE A DEEP DESIRE TO HELP OTHERS

You're here to share your message and your work.

And take that purposeful step in the direction of your dreams.

And you want to be paid well for the work you do that changes lives.

Plus have the freedom and lifestyle you crave.

Frazzled AF with how to build a successful business without going broke.

Confused, frustrated and defeated about your lack of results and continuous burnout.

Bursting with a million and one ideas to execute but paralyzed by what to start with.

Stuck in the perfectionist cycle and not getting anything done because it's "good" enough.

NOT making the income you really want to be making.. like AT ALL.

I KNOW HOW YOU FEEL

I was right there where you are for years - 5 to be exact - and I remember feeling so defeated.

I had the desire, the drive and the passion but I was constantly second-guessing myself.

I didn't know what tasks to focus on to grow my business, I'd get overwhelmed by the grand scheme of it all and if I didn't get things "perfect" I'd procrastinate or start a whole new blog.

That's when I started to think that maybe I just wasn't cut out for the entrepreneurial world.

But I scrapped that ridiculous thought pretty quickly because I realized that the problem wasn't ME, it was that I was making it too complicated.

I thought I had to do ads and flyers and go to lame ass networking seminars.

I thought I had to be an expert of the topics I wanted to talk about before I could teach on them.

I thought I had to be everywhere doing everything that everyone else was doing at the same time, and it had to be glitzy and glamourous.

Basically, I thought I had to be just like Marie Forleo and Jenna Kutcher.

But I realized that was so damn far from the truth.

I just want things to be straight to the point.

And that's when I decided.

I decided that business gets to be easy.

That making money gets to be stupid simple.

And, above all, it gets to be fun.

And guess what? Now it IS.

Want to learn how you can make it easy, simple and profitable for you too? 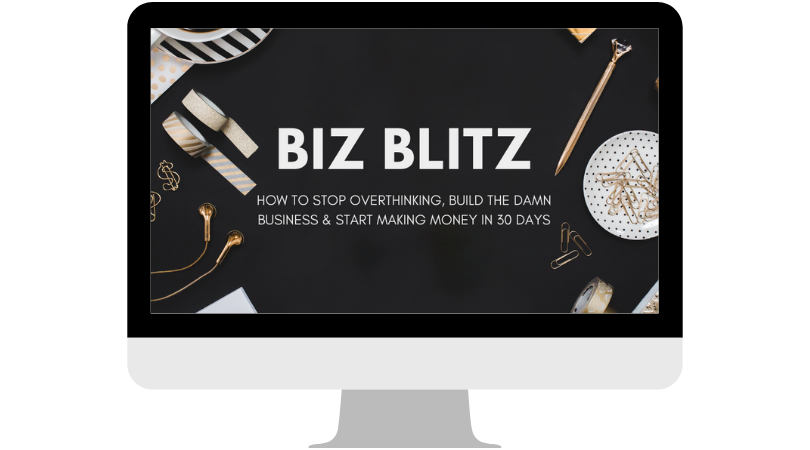 This course is for beginners and relatively new to business folks who are ready to stop overthinking, do the work to build the business in a non-complicated and simple way and start making money.

If you know me or you've followed me a while, you know I churn out content and products fast. I do things rapidly in my business now (unlike when I first started my biz). I don't let my excuses take over. I do the work.

That is EXACTLY what this course is like. I tell you how to do the things, you go and do them, It's all about done over perfect. So if that's what you're down for, then you're gonna love my Biz Blitz course.

MODULE 1: BUSINESS BASICS
You'll learn how to get your business started for free, productivity hacks and keeping a work routine, how to stay consistent and motivated when there aren't results, how to stop overthinking and procrastination as well as how to work through money blocks around your business.

In Module 2 you'll learn how to create high-converting landing pages in Mailchimp and ConvertKit, how to get your first 1000 email list subscribers, how to create . PDF's in Canva for opt-in offers aswell as ideas for leadmagnets and how to use countdown timers in your email marketing.

We all hear content is key, and it's true. So in this module you'll learn how to create content easily and how to batch it. You'll also get livestreaming tips and how to deliver your message simply, plus how to create video, audio and screenshare content on your Mac.

In your last module, you'll learn how to create a simple email Sales Funnel to sell your digital products through. You'll also get the simple process I use to launch an offer to my life, how to sell your products consistently and how to make bank on Black Friday.

So if you're brand spanking new to business and you want to learn how to build a blog or online empire just like I have, this is the course for you. 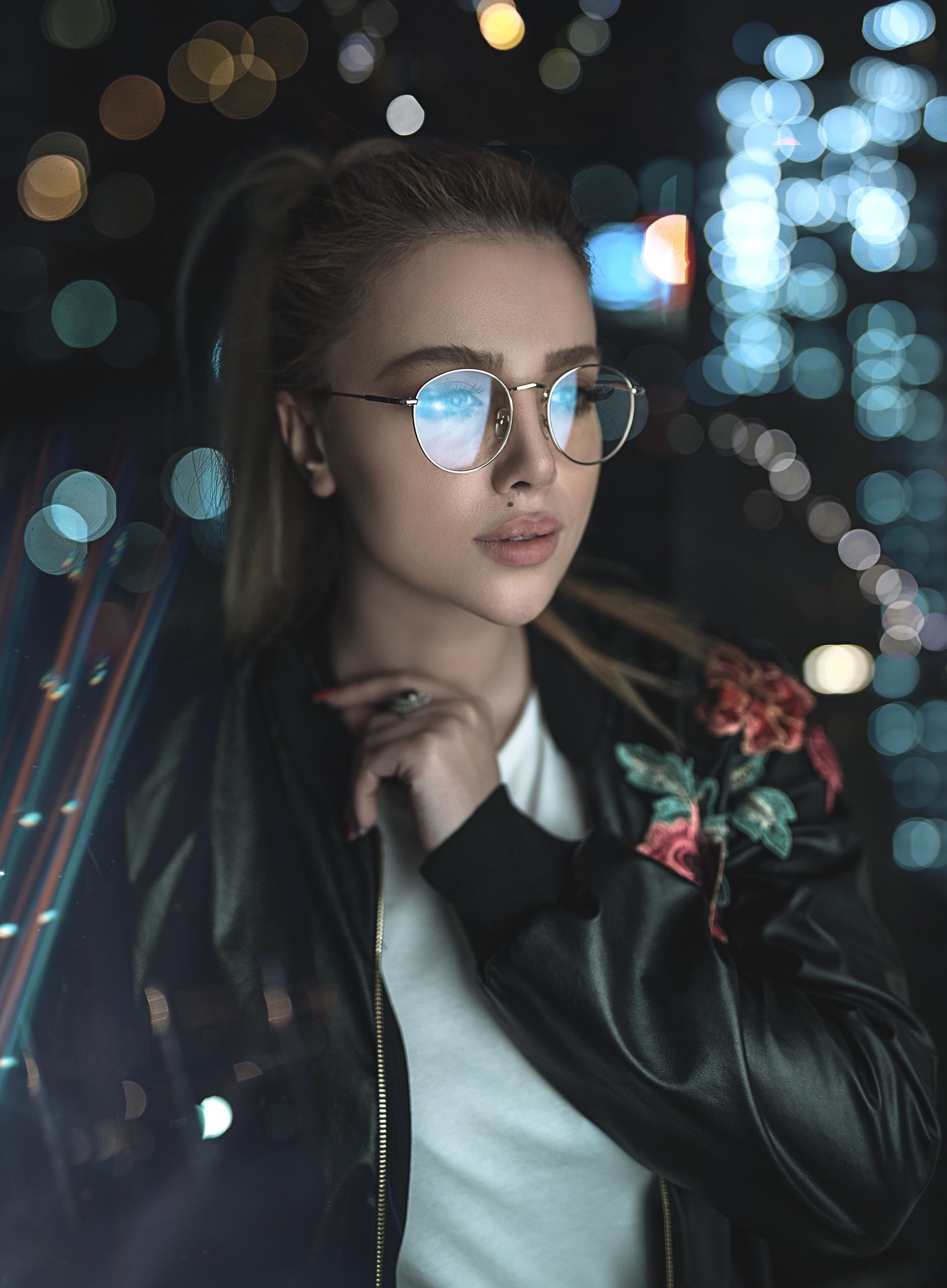 "Woooooow!!! This course was amazing! I learnt so much! I loved the lessons on how to create opt-in offers and creating high-converting landing pages. It made it really easy to understand what my landing pages needed." - Cerys 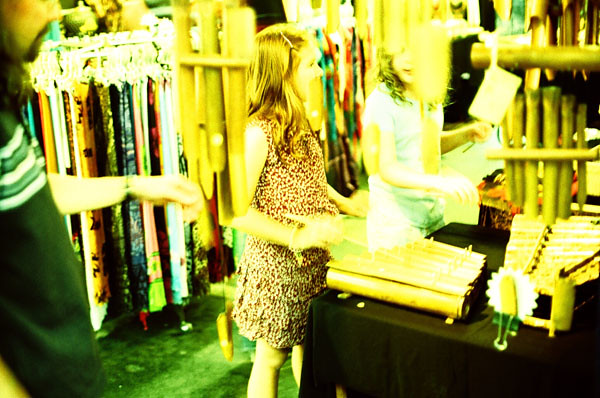 "Hi Elise, I just wanted to thank you for creating Biz Blitz. I followed your instructions for running a Black Friday sale and I made $1043 from my $47 dollar course! I'm going to use this strategy all the time now! Iloved that you created the email scripts for us. It just made it 100x easier for me to have the courage to do it. Thank you!" - Ivy 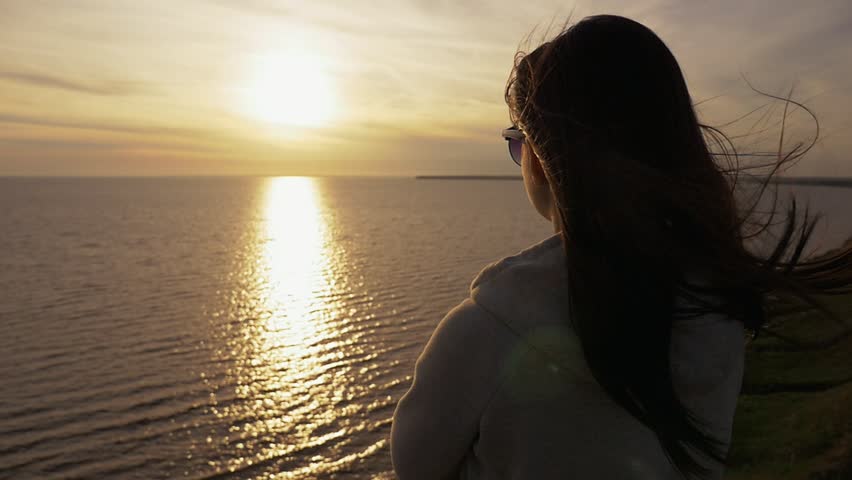 "The Pinterest and Youtube videos were fantastic! I loved all the tips and tricks. I implemented a couple for my Youtube channel and my views have gone up. My Pinterest traffic has grown a lot as well!" - Anonymous 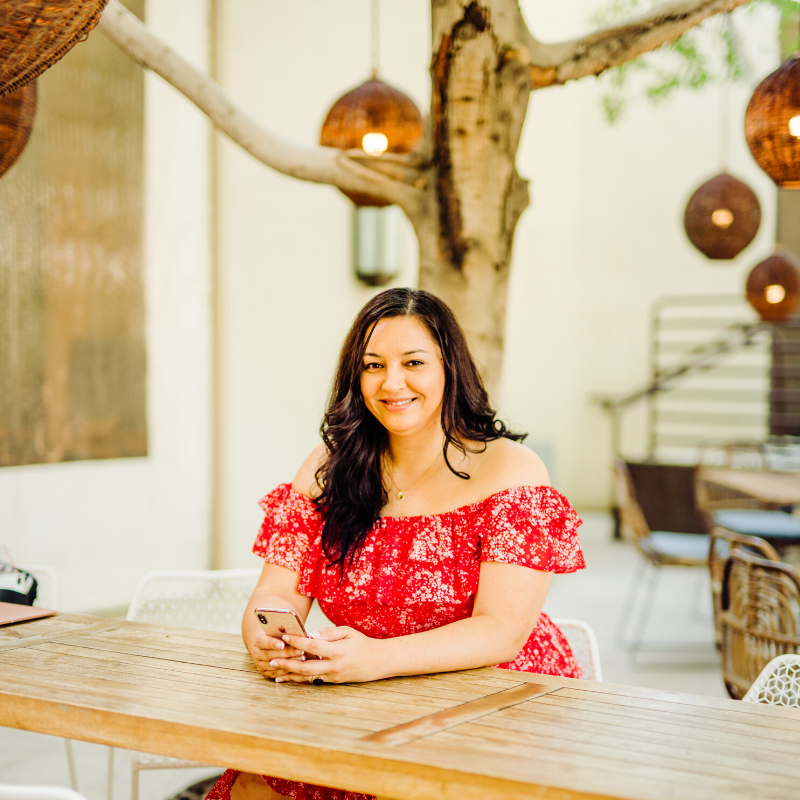 Hi there! I’m Elise McDowell, I'm a Speaker, Author, Podcaster and founder of House of Brazen. Since 2016 I've built a multiple 6-figure business with digital products and I help entrepreneurial women increase their income through mindset practices and sales strategy.

When does the course start and finish?
The course starts the second you purchase and you receive the content immediately.
How long do I have access to the course?
How does lifetime access sound? After enrolling, you have unlimited access to this course for as long as you like - across any and all devices you own.
What is your refund policy?
Because of the nature of the product, there are no refunds. If you have questions about the course, please contact us before purchase.
How do you deliver the content? Through what medium?
It's a mix of video, text and downloadable PDF's. It depends on what's required for the lesson.